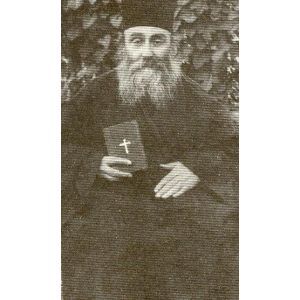 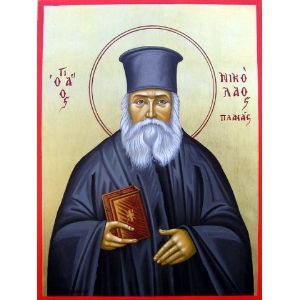 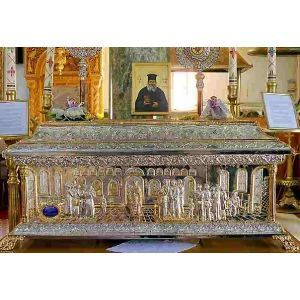 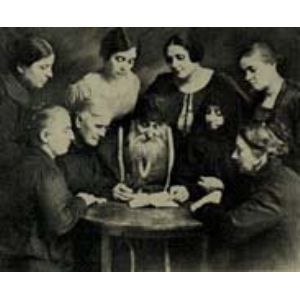 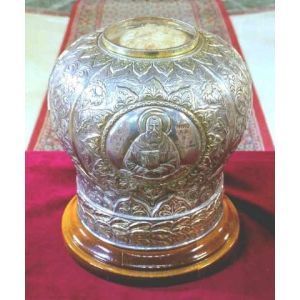 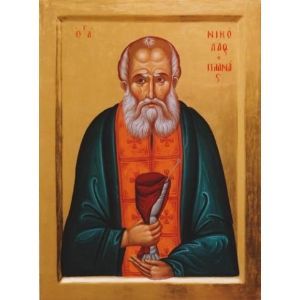 Saint Nicholas Planas was born in Naxos in 1851. His parents, captain John and Augustina, were quite well off but were also good people, with the simple and pure soul. They had their own estate, with a little chapel in the middle of it by the name of Saint Nicholas. Very frequently little Nicholas Planas would hide in the chapel wearing a bed sheet, and he would chant whatever he knew, as he was still a small child. At other times, he would gather his friends, and they would "celebrate" the Divine Liturgy.

He learned his first letters from his grandfather, Father George Melissourgos. Near him, Nicholas learned to read the psalter. He observed his grandfather's movements in the Holy Altar and followed him in all the liturgies he did in the innumerable country chapels.

His father died young. Thus, he left Nicholas an orphan at fourteen years of age. His mother took him and they went -together with his sister- to Athens. They settled somewhere between St. John of Plaka and St. Panteleimon of Ilissou, because there were quite a few builders and workers from Naxos island there. Their days were difficult. She took her children together with her no matter where she was working, because she was afraid to leave them all alone. She trembled at the idea that they might take the evil path.

When he reached seventeen years of age, his mother forced him to marry to a good girl from Kythira, Eleni Provelegiou. They had one child. Afterwards, he was ordained a deacon in the Church of the Transfiguration, Plaka, on July 28, 1879. Five years later, on March 2, 1884, he was ordained a priest in the church of the Holy Prophet Elisha. In the meantime, however, his wife reposed. So, carrying the burden of being a widower, he entrusted himself and his son John, to God's mercy. He had no estate because he had put his own portion of the inheritance as collateral on a loan, so that a compatriot of his could be saved from debt.

He was compassionate, and had no care for wordly things or estates. Night and day, he was absorbed in divine worship, and with his small parish of St. Panteleimon in Neo Kosmo, which was comprised of thirteen families. The people loved him. His simplicity, his island piety, his kindness, his chastity, his lack of love for money, drew everyone to divine worship. Everyone wanted him to bless their homes, their stores. And he ran everywhere joyously. From aristocratic homes down to the poorest homes, he never kept a drachma on him. The poor always waited outside the church for him to distribute whatever he had in his pocket.

However, a certain priest without a parish of his own, in cooperation with the council members of St. Panteleimon, kicked him out of his parish and sent him to the Church of Saint John, ("the Hunter" as they called it then) in Vouliagimeni. The new parish was very poor and was comprised of eight families. His payment as a priest was one piece of meat from the fattened lamb of Meatfare Sunday or Christmas. This did not bother him, however, because fasting was most important in his life. So long as he had a church, he was happy.

In the various churches, where he celebrated he was the consolation and refuge of people. He was the "sacred little elder" who comforted every human pain. His reputation had extended to the various eparchies also, and people hastened form everywhere to hear him celebrate the Holy Liturgy, to kiss his hand, for him to bless them! He reached 84 years of age and had never been slandered once, nor did anyone say anything against him. Everyone knew him and respected his holy personality.

On March 2, 1932, however, his holy life reached its end. He celebrated the Divine Liturgy for the last time on the Sunday of the Prodigal Son. As soon as he consumed the Holy Cup, he suffered a light fainting and was transported home, where his son John, and his daughter-in-law, Marigoula, offered their last services to their holy father. Like a little bird, he gave up his holy soul to Him, Whom he had worshipped his whole life long. News of the grievous event spread to all of Athens. People ran to venerate the relic of the holy elder. Everyone wanted to kiss his hand for the last time. The Archbishop of Athens, Chrysostom Papadoupoulos, suggested that the burial take place at night, so that everyone could embrace him. And this indeed happened.

His body was buried in the courtyard of the church of Saint John. His bones were placed in a siler reliquary in the new majestic church of St. John. His whole life was proof of the divine power and wisdom, which God the Creator grants to those who love Him and keep His commandments.

The Church of Greece, with an introduction from His Emience the Metropolitan of Patras, Nikodemos, who personally had met Saint Nicholas was granted to get his blessing, asked the Ecumenical Patriarchate to recognize Father Nicholas Planas' holiness. With a special Synodical Deed, the Patriarchate numbered him in the listing of saints of the Orthodox Church, and appointed that his memory be celebrated on March 2nd.