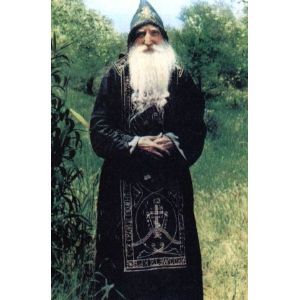 Papa-Tychon was born in Novaya Mikhalovka, Russia, in 1884, from pious parents, Pavel and Elena. When he was seventeen, they gave him their blessing to go on a pilgrimage to the monasteries of Russia for three years. Completing that, he moved on to the God-trodden Mountain, Mount Sinai, for two months, and settled in the Holy Land, beyond the Jordan, to live as an ascetic for a while. Unfortunately, the elder couldn’t find his peace there because of the many pilgrims and was forced to leave for the Holy Mountain.

On the Holy Mountain, Papa-Tychon lived for five years at the Cell of Bourazeri (a dependency of Hilandar), and then got a blessing to move to a cave in Karoulia, where he lived as an ascetic for fifteen years. All these years that he stayed at Karoulia, he spent his time in fierce struggles. His ‘handiwork’ was to make great and small prostrations, as well as to say the Jesus Prayer and study. So he struggled with philotimo -a term Elder Paisios often uses to mean 'the love shown by humble people'- to become an angel internally, too, not merely externally by wearing the angelic habit.

Eventually, Papa-Tychon left Karoulia as well and moved to Kapsala, at the southernmost tip of Athos (above Kaliagra) to a Cell belonging to the Monastery of Stavroniceta. There, he looked after an infirm, elderly monk for a time. After the elder died, received his blessing to stay there. In Elder Paisios’s words, ‘Divine grace revealed him to people and many, who were suffering, ran to him to consult him and be comforted through his great love’. It seems that although he was Russian, Papa-Tychon became a spiritual father to Orthodox of all ethnicities, his great disciple, Elder Paisios, for instance, being Greek.

Seeing the great need of these people, Papa-Tychon yielded to their entreaties that he be ordained, so that he could hear formal confessions. He providentially received a donation from America through the head of Prophet Elias Skete, and hired some monks to build a chapel at the Cell dedicated to the Precious Cross. There, according to Elder Paisios, he celebrated spiritually every day with his rule of prayer, which combined the mourning of the Cross and the brightness of the Resurrection, with his great ascesis and almost no human consolation in the hollow of Kaliagra, where he gazed at heaven and lived the joys of Paradise with the angels and saints. When anyone asked him, ‘Do you live all alone in the desert?’ the elder would reply: ‘No, I live with the angels and archangels, with all the saints, with the Mother of God and with Christ’.

Once, a man attempted to rob him, even going so far as to tie a rope around his neck in order to force him to give up his money, of which of course he had none. When the police finally caught the thief, they tried to get Papa-Tychon to testify against him, but he replied, ‘But, my child, I forgave the thief with all my heart’. Although the police laughed this off, ‘In the end the police chief took pity and let him go back to his Cell from Hierissos because he was crying like a little child at the thought that he would be to blame for the thief being punished’. Whenever he would have a visitor, after praying with them in the chapel and visiting for a while, Papa-Tychon ‘would get up with great joy and say: “Now, I have a treat for you”.

According to Elder Paisios, who lived with Papa-Tychon at the time, in 1968 the latter ‘had a presentiment of his death, because he continually referred to death’. After the feast of the Dormition, he became bedridden and did not want anyone with him for some time so that his prayer would not be interrupted. Then, in the last ten days of his life, he asked Elder Paisios to stay with him. Because he could no longer go to the Chapel of the Precious Cross, where he had celebrated the liturgy for so many years, he asked Elder Paisios to bring him the Cross from the Altar ‘as a consolation’.

Two days after the feast of the Nativity of the Mother of God, that is, on 10 September 1968, Papa-Tychon fell asleep in the Lord (thus, taking into account the calendar difference, the anniversary of his repose was only 11 days ago). According to a promise he made to Elder Paisios, after three years he began to appear to his spiritual child once a year, bringing him great consolation.