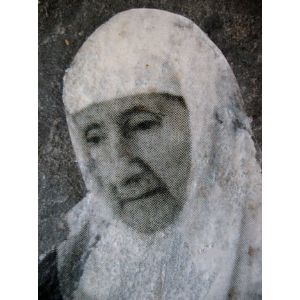 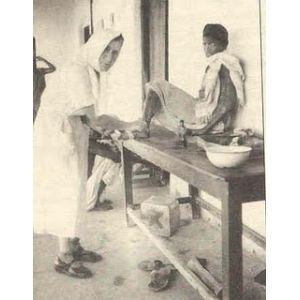 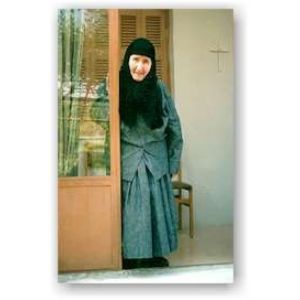 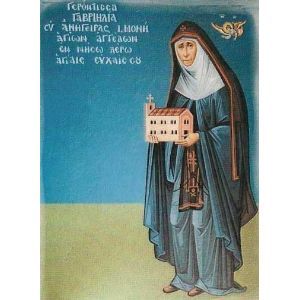 Gerontissa Gabrielia (Gavrielia) was born in Constantinople more than a hundred years ago on October 15, 1897 to Helias and Victoria Papayanni and was the fourth and last child of the family.

Gerontissa means further than an older nun, supervising the youngers, a spiritual person, who guides others with wise advice and knowledge given from God, in prayers. Her life is a trail of wonders.

She grew up in Constantinople until her family moved to Thessaloniki in 1923. She went to England in 1938 and stayed there throughout the Second World War. She trained as a chiropodist and physiotherapist. In England they honored her for her services during the war and after.

In 1945, she returned to Greece. In 1954, March, her mother died and it changed her life. Sister Gabrielia left Greece and traveled overland to India, where she worked with the poorest of the poor, even the lepers, for five years. She worked with Baba Amte and his family, who built and organised village-communities for the lepers of India. She kept no penny in her pocket. Just trusted herself in His hands.

In 1959, she went to the Monastery of Mary and Martha in Bethany, Palestine, to become a nun. When she arrived, she asked Fr. Theodosius the chaplain for a rule of prayer. Fr. Theodosius was somewhat surprised to find that she could read even ancient Byzantine Greek. Therefore, for her first year in the monastery he set her to reading only the Gospels and St. John Climacus.

She was three years in Bethany. In April 1962, Patriarch Athenagoras of Constantinople sought to send an Orthodox monastic to Taize in France. Sister Gabrielia went from Taize to America.

In 1963, she was back in Greece. The Gerontissa was tonsured to the Small Schema by Abbot Amphilochios (Makris) on Patmos in the Cave of St. Anthony under the Monastery of Evangelismos just before she and the nun Tomasina left again for India. Elder Amphilochios was enthusiastic at the idea of a nun, who would be open to the active outreach in the world. In India, she was for three years in Nani Tal in Uttar Pradesh, where Fr. Lazarus (Moore) was the priest and where he consulted the Gerontissa in his translations of the Psalter and the Fathers. Between 1967 and 1977, Gerontissa traveled in the Mission field of East Africa, in Europe, including visiting old friends and spiritual fathers Lev Gillet and Sophrony of Essex, again to America, and briefly in Sinai, where Archbishop Damianos was attempting to reintroduce women's monasticism.

She traveled extensively, with much concern and broad love for the people of God. Some of her spiritual children found her in Jerusalem beside the Tomb of Christ; others found her on the mission field of East Africa. In the 50s and 60s, she used to have a few thousands of spiritual friends from all over the world! She used to pray for everybody day and night!

In the year 1977, she lived hidden in a little apartment, the "House of the Angels" in Patissia, Athens, in the midst of the noise and smog and confusion of central Athens. In 1989, she moved to Holy Protection hermitage on the island of Aegina, close by the shrine of St. Nectarios. There she called the last two of her spiritual children to become monastics near her, and there she continued to receive many visitors. At the start of Great Lent in 1990, she was hospitalized for lymphatic cancer. She was forty days in the hospital, leaving during Holy Week and receiving communion on Pascha. And to the puzzlement of the doctors, the cancer disappeared. It was not yet her time.

Gerontissa finally withdrew to quiet. With only one last nun, she moved for the last time in this life, to the island of Leros. There they established the hesychastarion of the Holy Archangels. Only in this last year of her life did she accept the Great Schema at the hands of Fr. Dionysious from Little St. Anne's Skete on Mount Athos. He came to give her the Schema in the Chapel of the Panaghia in the Kastro on the top of Leros.

Gerontissa Gabrielia reposed on March 28, 1992, having never built a monastery. Her biography and collected writings were published in Greek in 1996, through the work of her last monastic daughter and the contribution of many, many others, who held the Gerontissa dear.

Anyone, who knew the Gerontissa realized that God has not left us without His saints, even down to the present day. The few words recorded here scarcely suggest the clarity and love of her soul. Words are only the tools of this world; the wonder of Gerontissa was wrapped in the mystery of the silence of the world to come. She was humility and love incarnate.