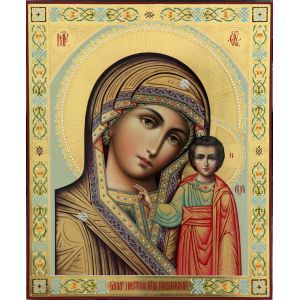 Tradition says that the icon of Virgin Mary of Kazan was a gift from the Patriarch of Constantinople Germanus II to the inhabitants of Kazan city in the 13th century. The Patriarch donated the image as a sign of support, consolation and hope to the inhabitants against the frequent raids they were suffering from.
When the city was eventually captured by the Tatars in 1438 AD, something amazing have happened. The icon of Virgin Mary mysteriously disappeared. Later, in 1579 when the Kremlin of the city was completely destroyed by fire. The Muslims attributed the destruction to the wrath of the prophet Muhammad. At that time, there was hate among the inhabitants of the city that led to a civil conflict. The Virgin Mary, however, did not leave them helpless. She appeared to a young lady, Matrona, and pointed to her where the holy icon was buried.
The little Matrona explained what happened to her mother and then informed the Bishop of the city, Saint Gouria. The Holy Bishop Gouria listened carefully to what the little Matrona had told him and enlightened by the Holy Spirit he obeyed to the will of Virgin Mary. The holy icon of Virgin Mary , was found at the point where little Matrona pointed out, at a depth of three feet on July 8th, 1579. Saint Gouria carried the holy icon with the appropriate honour and with the participation of all the Christian inhabitants of the city to the Church of Saint Nicholas.
The icon of the Virgin Mary of Kazan has performed countless miracles, the first was the cure of the blind Joseph. Virgin Mary of Kazan was so important that the first Tsar of the Romanov dynasty, Micheal Feodorovich (1613-1645), established two celebrations to honour it. A religious one, in regards of the discovery of the holy icon on July 8th and a national one for the release of Russians by the Poles on October 22st.
Since then, this holy icon has become the symbol and protector of all the Russians. Indeed, when they are to be engaged, the Czars crucified their rings on it for blessing.
There was a tradition that says that as long as the holy icon would be in Russia there will be peace. However, on November 29th 1904, the Sacred Image disappeared mysteriously from the Holy Monastery of the Virgin Mary of Kazan, where it was guarded. Some claimed that it was been stolen because of the valuable frame that covered it. And indeed, it was. The robbers were caught, the cover was found, but the picture was never found. More surprisingly was that even the copy that it was in St. Petersburg was also disappeared in 1917 on its way to Moscow.