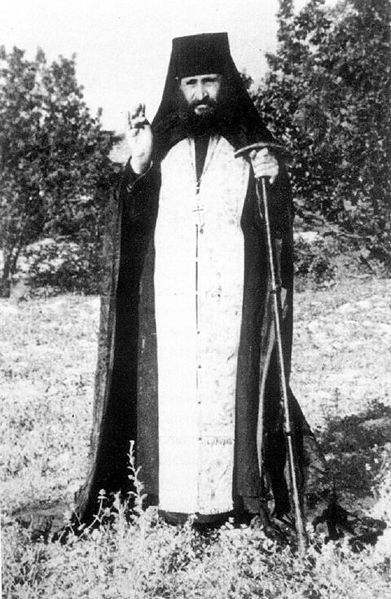 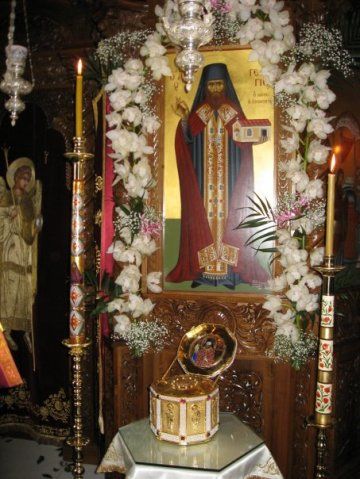 Saint George Karslides was born in Argyroupolis, Pontos in 1901. He became an orphan very young, so it was his pious grandmother, who raised the young Athanasios (St. George's baptismal name) to have a "holy fear of God and a fervent love for the Church's divine services". The region of Pontos in Asia Minor has historically been a great seat of Orthodoxy and more recently was also the site of such spiritually important monasteries of Panagia Soumela, Peristereota and St. John Vazelonos. At the age of five Athanasios began tending his family's flocks, all while bearing the harsh treatment of his older brother, who made life difficult for him and for his younger sister Anna. They bore this with love, perseverance and holiness. In fact, when Anna died at a young age, light emanated from her grave. Three years later, when her remains were exhumed, her bones had the same yellow hue as the Saints of God.

Because of the extremely difficult situations he was facing, at the age of seven Athanasios decided to run away, and was sheltered for a while by some crypto-Christians. St. George the Great-martyr was a great protector of Athanasios, and he appeared to him, told him to mount his horse and helped him travel to Tiflis, Georgia, where a pious priest took care of him. The priest was impressed by his spirituality and maturity, and clothed him in a cassock from age nine. In 1919 Athanasios was tonsured a monk with the name Symeon, and during his tonsure the bells of the monastery began to run by themselves. Fr. Symeon still faced many difficulties, however, as his monastery was soon closed by the communists, and the monks were humiliated, imprisoned and threatened with execution.

Once released from prison, he was ordained by Metropolitan John Tsiaparaski of Grouzia Scheta in 1925, and was given the new name, George. He was recognized by many as being a God-bearing elder. Despite his difficult situations, he was constant in his ascetical struggles, eating mostly wild greens, sleeping little and pursuing voluntary poverty (for example, refusing a new cassock to replace his old one, which was falling apart). His service of the sacraments was filled with his love, care and attention.

In 1929, most likely because of his failing health (not quite thirty years old and semi-paralyzed), St. George moved to Greece, and settled in the town of Sipsa near Drama in northern Greece. He gradually recovered with the help of the local inhabitants, who became aware of his holiness and sought his help. In 1936, the Elder went on a pilgrimage to the Holy Lands, where he met his uncle, who was a monk and urged him to return to serve in the world, where there was a great need for spiritual guidance. Later, the Elder was given a plot of land by the Greek government, and in the year 1939 he founded a monastery and dedicated it to the Ascension of Christ was consecrated.

Many of the accounts of the counsels and miracles of St. George come from this later period of his life as the shepherd of the community of Drama. He gad foreseen both World War II and the Greek Civil War. During the civil war, three different groups of fighters went to slaughter the inhabitants of Sipsa, and they each felt intense remorse and apprehension and repented beforehand without harming the villagers. The Elder had foreseen this danger and instructed the inhabitants to have a procession around the village with the icon of Panagia. Thus, the village was saved from certain destruction.

There are many other stories of St. George's discernment and spiritual gifts: "On another occasion a woman visited him and before she even managed to greet him he told her, "Your hands are on fire. They are burning, but we don't see the fire. What work do you do?" She told him that she was a midwife. "How many children have you killed?" he then asked. She denied having killed any. "Shall I tell you? Five." He went on to tell her in which villages and of which mothers the children were whom she had aborted. Speechless, the lady wept and through active repentance was reconciled to God."

In early 1959, St. George foresaw his upcoming death. As the day approached, he gave instructions to his spiritual children on his departure. "On the eve of his repose he asked to be helped to go into the monastery church. There, he venerated the icons and partook of the Holy Mysteries one last time. A few hours after midnight on November 4th, 1959, St. George reposed near Lord.