Lady of the Lilies 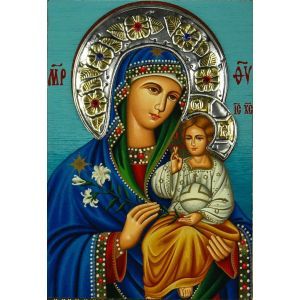 The Virgin of the Lilies is called also Panagia Gravelotissa, because of the way in which the miraculous icon of Panagia (Virgin Mary) was found in Pastra of Kefalonia. The icon was found in a miraculous way. It was early August and the preparations for the new crop had begun. The local ruler of the time, Konte Lianou, ordered all the farmers to begin cleaning their vineyards. So, while clearing the dried grass with their rakes, something extraordinary happened.
In the rake of a servant who worked under Conte's services, a wood was trapped. Trying to pull it, he found that the wood, which he persistently wanted to get rid of, was matching to an icon of Virgin Mary.
The servant was stunned for what have just happened to him. So, he stopped his duties and ran to inform Conte. However, he was so busy with other problems, and his daughter ‘state who was in a wheelchair, instructed the servant to take the icon to the church of St. Demetrius.
That same evening Conte saw the Virgin Mary in his sleep telling him: "Why did you take me away from my house?" Immediately he woke up and he run to the church in order to get the picture he had renounced the day before and bring it back to his home. Coming back from the church of Saint Demetrius, full of awe he enters in his home. As soon as her young daughter faces the icon, she stands up slowly and with caution on her two legs, and she starts to worship the miraculous icon.
After that Konte decides to build the church of the Virgin Mary in the place where the picture was found. The church was built in memory of that miracle. Every 15th of August, on the feast of Virgin Mary, miraculously flourish the dry lilies, which the women of the village pick up and place them on the iconostasio wall of their houses.
In particular, the miracle is as follows. In the courtyard of the church of the Dormitation of the Virgin Mary and in various flower beds, the women of the village planted bulbs of these lilies. In May, the lilies begin to bloom and cut them and put them in bouquets in front of the sacred and miraculous icon of the Virgin Mary. As the days pass, the lilies dry out, as the laws of nature command. Until August 15th, when along with the resurrection of Virgin Mary, the dead lilies also resurrect! After the Divine Liturgy, the priest distributes the flowers as a blessing to the Christians.