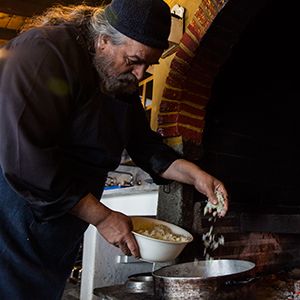 The monastic diet is not only what we call the Mediterranean diet. It is much more. It is that monks still eat in the traditional way. Μonks do not breakfast, lunch and dinner. In the monastery there is morning and evening ''trapeza''(dinner). Two meals a day, just with regular breaks. Meals lasting about twenty minutes, without noises and discussions, as the the Athonite monk Epiphanius Mylopotaminos says.


Nowadays, as the monk Epiphanius explains the monks of Mount Athos routinely eat vegetables because fasting. Also consume and vegetables out of season which they kept the refrigerator. Most monasteries bread is wholemeal wheat flour. Modern monks, such as the older, eat all legumes except dry beans. In all monasteries eat fish, usually during the weekend and holidays and rarely consume salted cod. Most fish and octopus eating monks today is frozen. also drink minimum raki and consume enough dairy products but only on the days that having catalysis. Also consume fresh fruits which grow themselves and fruits preserved in the refrigerator. The diet includes them even Lenten sweets, fasting and artysima period, with milk, butter and eggs, festive days.

"We can say that today the monks on Mount Athos, eat more sweets than the oldest. The desserts are mostly sugar and very little honey. Sweet with molasses today do not exist. Instead, there is the Lenten halva made from sesame seeds and sugar, "says the monk Epiphanius.

The benefits of monastic diet :

Referring to the benefits of the monastic diet elder Epiphanius summarizes as follows:

- Reduces the cholesterol and triglyceride in blood.

- Protects against osteoporosis and several types of cancer.

- It has anti-aging properties.

- Minimize death rates from stomach cancer and lung because monks do not smoke.

- It is rarely the case of prostate cancer.

- Low rate of cardiovascular events, and all diseases that are directly related to the heart, namely pressure, atherosclerosis, cholesterol, triglycerides, etc.

The simple and austere way of eating the monks of Mount Athos is one of the best versions of the traditional Greek diet.
In many people seem strange that the monks eat ath themorning. Indeed, the food you eat around nine a.m. call lunch. This food usually called dinner monks eat in the afternoon. In the monastery there is morning and evening trapeza - dinner.
Here you can see several monastic recipes.