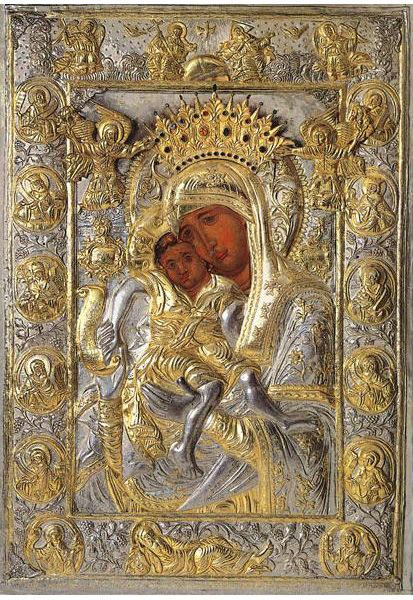 This miracle-working icon, which is today kept on the synthronon of the church of the Protaton in Karyes, was in the late 10th century in a kelli near Karyes which today bears the same name of “Axion Estin” because of the following miracle:
While the Elder of the kelli was absent at a vigil in the Protaton, his hypotaktikos happened to be providing hospitality to some passing monk, unknown to him, with whom he was signing the service of Sunday Matins.
When they came to sign the ninth ode of the Canon, the monk of the kelli sang “More honourable...”, the familiar ancient hymn by St Cosmas the Poet, which was sung then, as it is now, together with the verses to the Theotokos of the ninth ode (“My soul doth magnify the Lord...”), while the monk who was a stranger began “It is meet (axion estin) as truly...”, which the monk of the kelli admired so much that he asked for it to be written down, so that he could sing it too. But since no ink or paper could be found, the mysterious stranger inscribed the hymn with his finger one a stone slab, and saying that thus the hymn should be sung ever after by all Orthodox, he disappeared.
The Athonites sent the slab to the King and to the Patriarch, while the icon before which this angelic hymn had been sung for the first time was taken to the Protaton, where an annual feast was established in commemoration of the miracle and to the honour of the Theotokos. According to the ancient synaxarion, this feast was originally held at the kelli where the miracle took place, an in honour of the Archangel Gabriel, who, without a doubt was the remarkable monk who was the unkown guest.

See here all the available icons of Theotokos Axion Esti