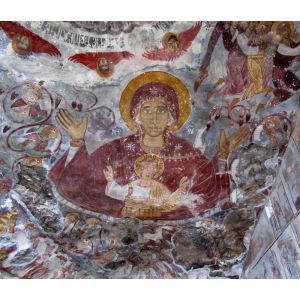 On Mount Mela of Trebizond, at an altitude of 1.063 meters, inside a cave was founded the monastery of Virgin Mary of Sumela in 386 AD. The monastery was built by two Athenian monks, Barnabas and Sophronios, and this particular name was given to Virgin Mary, because of an expression, which Pontic Greeks were using when they were climbing the Mount Mela.
The miraculous image, which, according to tradition, was drawn by the Evangelist Luke on wood, along with the Holy water with the healing abilities, were the reference points of the monastery.
However, the brutal behavior of the Turks and the Kemalists towards the monasteries of Pontus, led to the total destruction of the monastery in 1922. Short time before the population exchange between Greece and Turkey during 1923, the monks hid the holy icon together with the Holy Cross of Manuel III and a manuscript gospel of Saint Christopher, in the chapel of Saint Barbara.
But history does not stop there. In 1931, with the intervention and encouragement of Eleftherios Venizelos, one of the two remaining living monks of the historic monastery traveled from Thessaloniki to Pontus, willing to uncover the heirlooms and bring them back to Greece. Indeed, the monk managed to take with him the heirlooms, which are symbols of our faith and of Orthodoxy, and bring them back to Greece.
A few years later, in 1951, the construction of the new monastery of Virgin Mary Sumela have started in Vermio, which is the point of reference for Pontian Hellenism in Greece. There, the icon of Virgin Mary of Sumela found a "home" and it was placed together with the rest of the heirlooms. Every year, on August 15th, Virgin Mary of Sumela is celebrated, and many faithful, Pontic and non- Pontic Greeks are visiting the monastery to worship the holy icon.