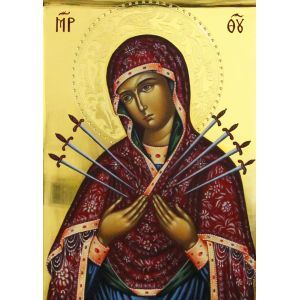 The image of the Virgin Mary with the Seven Spades, four on the left and three on the right, relates to the prophecy of Saint Simeon the Theodochus, recorded by the Evangelist Luke: "...and the pain, go through your heart, as a stabbing sword..." (Luke. 2.35). These words refer to the pain that Virgin Mary would have experienced at the time of her separation from her beloved Son when he was crucified in front of her eyes.
This icon was in the bell tower of a church near the River Tossen. However, without knowing the reason, the image was face down and served as a simple board. God, of course, did not let that happen for a long time. A resident of the region, Kadickof, who suffered from many illnesses, saw in his sleep that he had to look for an image in the bell tower and pray to the Image to be cured. Indeed, he went to the church, but the people who were there did not pay much attention to him. The man, however, did not leave them and continued to visit the church until the third time the people gave him the permission to search for the icon. Kadickof found the image, cleansed it, worshiped it and he was healed.
The image did many more miracles. In 1830 in the town Bolonga there was a cholera epidemic. Then they made a litany with the image of "Virgin with the Seven Swords" and the disease miraculously ceased.
Apart from the miracles, however, the icon of the Virgin Mary, in moments difficult for the people, was tearful. This happened on August 12, 2000, when the tragedy with the submarine Kursk occurred and on September 11, 2001, when the Twin Towers collapsed. The image is also known as "The Prophecy of the fair Simeon "or "The Peace of the Evil Souls".