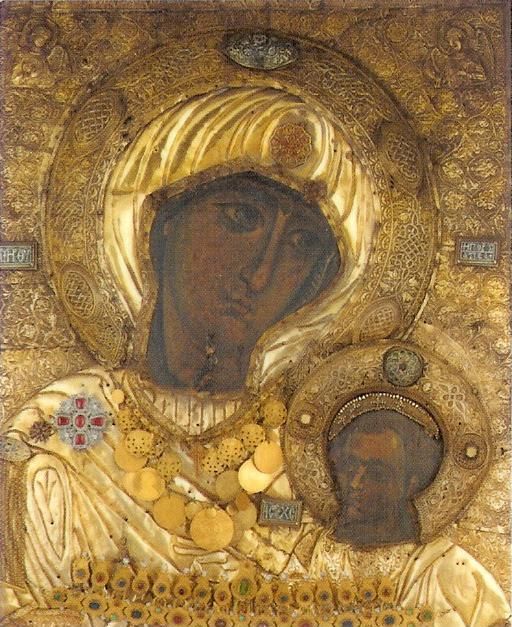 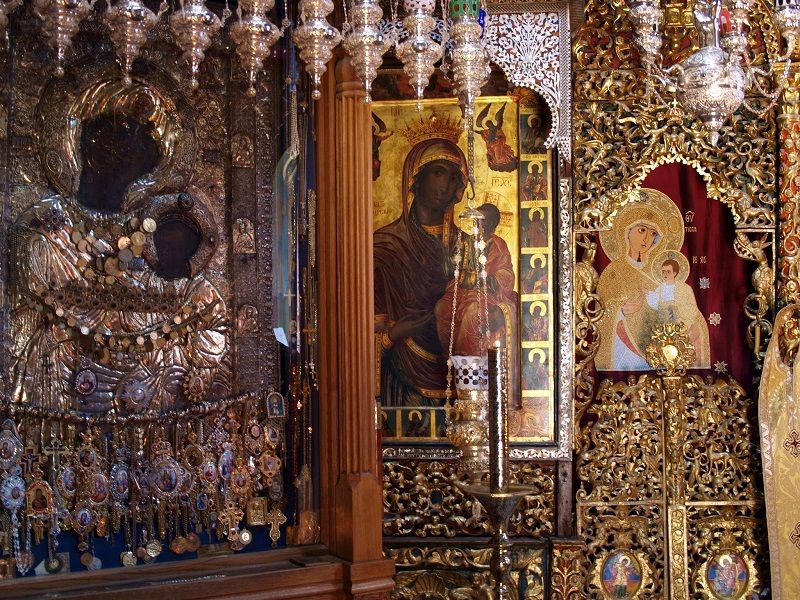 The most famous and most revered miraculus icon of the Theotokos which the Holy Mountain possesse was, in the 9th century in the reign of Theophilus the Eikonomachos (Iconoclast), the personal property of a devout widow from Nicaea in Asia Minor, who kept it and honoured it in her private chapel. The Emperor 's men who got to hear of this decided not to carry out immediately the order about icons, but to start by trying to blackmail its rich owner.  In the time which they gave her to collect the money they demanded, the widow took the icon and her dearly loved son and, after fervent prayer, took it to the sea and left it on the surface of the waves, so that it should not be defied by the iconolasts. The icon stood upright on the water and began to head towards the west, while the widow 's son, following her advice, also fled towards the west to escape persecution. Later he became a monk and died on the north-east coast of Athos near or in the Monastery of Clement, and so the anchorites round about heard from him the story of the icon.
One evening, when monks from Georgia (Iberians) had started to live at the Monastery of Clement, an amazing phenomenon puzzled all the monks of the area: a column of fire stood upright on the sea and reached to the heavens. This vision continued to be seen for several days, and then the monks saw the icon at the sea. They made their supplications to God that this priceless treasure should be given to them, and the Theotokos appeared to the devout anchorite Gabriel the Iberian and made him walk on the water to take the icon and to give it to the Abbot and brethren of the Monastery.
Nevertheless, after its reception and installation in the church, the icon repeatedly disappeared and was found above the gate of the Monastery on the inside. In a dream, the Blessed Virgin told St Gabriel that this was the place which she herself had chosen, so that she could protect the monks and not be protected by them. Thus the icon took the name of “Portaitissa”, and until this very day its presence in the Monastery and on the Holy Mountain is regarded as a guarantee of the protection of Athonite monasticism by the Theotokos. Later, a chapel was built near the wall of the Monastery in which the icon was placed, while the old entrance was closed and another, grander, one built. The miracles performed by the Portaitissa are without number, especially on 15 August and on Monday of Diakainisimi Week, when there is a procession and the finding of the icon is commemorated with a Liturgy in the chapel on the shore, at the exact spot where St Gabriel took it out of the sea.

See here all the available icons of Theotokos Portaitissa