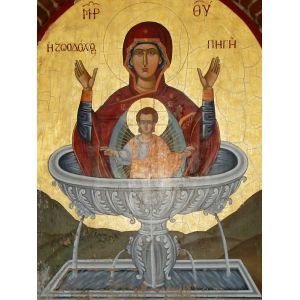 About 450 AD a Byzantine soldier, called Leon, was in a forest, when he saw a blind man in front of him asking for some water to quench. Leo was willing to search and bring him water. So, he was searching in the forest for a long time to find some source of water but in vain. So, he returned sad.
Suddenly, he heard a woman's voice telling him: "No need, Leo, to worry, to be angry, to be sad, the water is beside you". And after a while he listened to the unknown voice commanding him: "Leo King, take this water and let the blind man drink and quench, and one more thing, smear his eyes with this and you will soon understand, who is the voice that is talking to you". That's what Leo did, and then the blind man found his light. At the same time, Leo's eyes were opened, and he realized that the voice that spoke to him was of the Virgin Mary and that the great miracle of the healing of the blind was due to her.
Also, remarkable miracle was the finding of the source of this saving water. At the same time, another miracle happened when Virgin Mary announced Leo as a king. In fact, Leo, in 486 AD, ascended to the throne of the Byzantine Empire as Leo the First Thracian, also called Matellis (457-474).
Leo, as the emperor, built a magnificent Temple dedicated to the Virgin Mary the Life-giving Spring, where the miraculous water spring was located, as a reminder of the Virgin Mary's donation and all her great benefits to the people.
This miraculous water spring of the holy temple, has cured many believers, including Emperor Justinian the First, Leo VI the wise, his wife, Holy Queen Theophanu, Romanos I Lekapenos and his wife, the Patriarch Stephen (886-912), Patriarch of Jerusalem John (964-966), but also a lot of other Lords and ordinary people. Even dead raised the holy water of Life-giving Spring.
Later, the Temple of Life-giving Spring was demolished by Turks to build with its materials the mosque of Sultan Bayezid. The Christians in that place built a chapel and later a larger temple (1835).
Our Church celebrates the inauguration of this holy Temple of the Holy Virgin Mary of Life-giving Spring on Friday of the Diakinesis. This temple was known in history as the sanctification of "Balukhli". In fact, "Baluk" in Turkish means fish and according to tradition, there, beside the holy water, on 23rd of May 1453 a monk was informed that the Turks invaded in the city while he was frying fish. At that time, the monk said that only if the frying fish escaped from the pan and fell into the holy water, would have believed that this happened. And the fish suddenly became alive and fell into the source of the holy water. To date, seven fish are maintained in the reservoir of Life-giving Spring.
Besides legends and traditions, the Virgin Mary of Christ and the mother of all Christians, remains for us all the Source of Life, as she brought Life, Jesus Christ to the world, our hope and protection, "the refuge and the jubilance".