The Inexhaustible Cup of Life 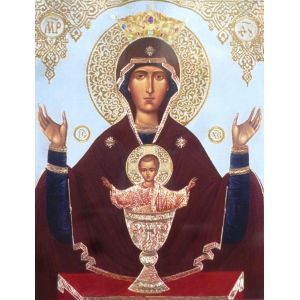 The icon of the Virgin Mary, called the "The Inexhaustible cup of Life", became known to the Orthodox World only in 1878, when a miraculous event occurred. In the Yefremovsky District of Tula province in Russia, lived a retired soldier, called Stephen. This man suffered from alcoholism. He spent all his fortune on alcohol and lived an unpleasant and vulnerable way of life.
One night, however, he experienced an unusual dream that shook him a lot. A monk in imposing form appeared in his sleep and said to him: "Go to Serpukhov in the monastery of Virgin Mary. There, you will find her icon called " The inexhaustible cup of Life". You will pray in front of it and your body and soul will be cured immediately. But the man showed reluctance and did not obey these words. The monk, however, appeared again in the man's sleep insisting on making this journey. After appearing for the third time, Stephan decides to obey the monk's command and start the journey, although his legs were weak due to the paralysis.
Thus Stephanos, with a lot of difficulty, due to the condition of his feet, began the journey immediately. When he arrived at Serpukhov and entered the Monastery "Vladychnyy", he asked to worship the image of the Virgin Mary "The inexhaustible cup of Life", according to the command given to him. To his surprise, however, no one knew the icon with this name. Then one of the monks said that it might be that picture depicting the Virgin Mary with Christ in the Holy Grail. This image was placed on the pilgrimage of the corridor leading from the Temple to the sacristy. Everyone was surprised when, at the back of the picture, they read the inscription that read: "The Inexhaustible cup of Life".
But something miraculous have happened: in the image of the founders of the Monastery, St. Alexius of Moscow and St. Barlaam, Stephen recognized that it was St. Barlaam the monk who appeared three times in his dream. The, up to that point, alcoholic and paralyzed man, returning from Serpukhov, healed himself and became well! Most importantly, however, he no longer had a desire and inclination to the harmful habit of drinking.
Soon the amazing event of the alcoholic paralysed was known throughout the region. Many people, even from distant places, began to come to the miraculous icon of the Virgin Mary at Serpukhov. People who suffered from the passion of drunkenness or were addicted to smoking and hallucinogenic substances, and their relatives, prayed to the image of the Virgin Mary "The inexhaustible cup of Life" for treatment and relief from their diseases. Many were also those who came to worship and thank the Virgin Mary.
In 1919 the Communists closed the monastery and the entire building complex together with all the surrounding churches, which they have now changed purpose. The icon of the Virgin Mary was then transferred to the Cathedral of St. Petersburg, St. Nicholas. In the years 1928-1930 an attempt was made to celebrate the miraculous icon again because, due to the persecution, the celebration of the image had ceased. Then the Metropolitan of the town Emmanuel, blessed after a request of number of faithful Christians, 8 copies of the icon. The year 1929 Atheists ceased the operation of the Cathedral of St Nicholas and everything existed within was burnt on the banks of the Nara River. The icons of Virgin Mary "The inexhaustible cup of Life" including the copies disappeared, and any worshiping event in honour of that image was stopped.
The devotion and honour to the holy and miraculous icon of the Virgin Mary revived in Serpukhov in the 1980s. In 1990, Archimandrite Joseph repaired the destroyed Vladychnyy Monastery at Serpukhov. Nowadays, celebrations on behalf of the icon of the Virgin Mary are again taking place in the Monastery.