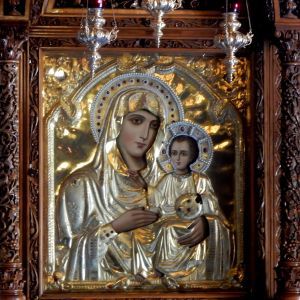 The miraculous image of the Virgin Mary of Jerusalem was hagiographed in 1870 AD, in a miraculous way. At that time, there was an hagiographer nun named Tatiani at the Russian Holy Monastery of the Myrrh of St. Mary of Magdalene, at the foot of the Mount of Olives, opposite Jerusalem. One night, as she slept, she saw in vision that an unknown nun had visited her cell, telling her: "Sister Tatiani, I came to paint me". Tatiani replied: "Bless, sister, but I am a hagiographer and not a painter". Then the woman responded: "Then create a hagiography of me".
Tatiani was surprised by the courage of the stranger and said, "I have no wood, where can I paint you?". Immediately, her visitor nun gave her a plank of hagiography and instructed her to paint. But while Tatiani painted the unknown nun, she suddenly saw her vestments turn gold, her face shining a lot and she heard her say, "Oh blessed Tatiani, after the Apostle and Evangelist Luke, you will try to paint me once again."
Tatiani realized she was painting the Virgin Mary! She got upset and woke up. Immediately, she rushed to the Abbot and narrated the vision she saw. The Abbot was distrustful of her words and told her to sleep and the next day to paint an image of the Virgin Mary. But as she returned, she saw that her cell was bathed in the light and scent was coming out of it. Then she notified the Abbot and together they entered the bright and fragrant cell, where they saw the most amazing miracle. The image of the vision was within the cell, real, unmanned!
After all this, Virgin Mary is again presented to the nun and says: "Take me down to my house, in Gethsemane". The word of Our Lady became an act immediately! Since then the unmanned picture of Virgin Mary "The Virgin Ierosolymitissa" is found in the Holy Pilgrimage of the Historical Monument of Gethsemane. This place is the empty tomb of Our Lady, known as the Kenotaphios (empty tomb), since her body was taken up in Heaven on the third day of her Dormition and is capable of doing miracles. According to the tradition, even the three times that the Holy Temple was flooded in Gethsemane, the image rose alone from the marble throne found and stood in the ventilation system, without any support! Her miracles are innumerable wherever she went. The miraculous icon has travelled to many places in Greece for worship, while a faithful copy of it is in the town of Genesis, Xanthi.