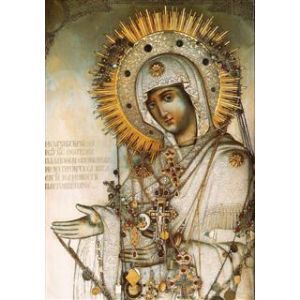 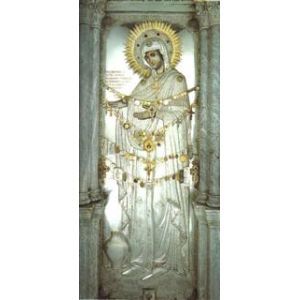 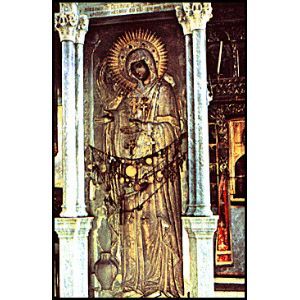 The Holy icon of the Virgin Mary "Gerontissa" is found in the Holy Monastery of Pantocratoros and is the main icon of the Monastery. The tradition says it is a gift of Byzantine emperor Alexius A' Komnenos to the monastery. The icon is a copy of the mosaic image of the Virgin Mary of "Gorgoepikoos", which was located in the H.M. of Pantocratoros in Constantinople, which was built by the emperor himself.
The particular icon is the only portable image, which depicts the Virgin full-body in a stand of obedience. Its figure of Virgin Mary is pleasant, sweet and full of mercy, giving to every worshiper feelings of joy, hope, consolation and compassion.
The icon of the Virgin of Gerontissa is miraculous. The first miracle attributed, dates back to the reign of Alexius A' Komnenos. When the original Manydri was built, about 500 meters away from the current buildings of the Monastery, and while the workers were building, the picture along with the tools of the builders disappeared mysteriously. While they were searching for them in the morning, they discovered them at the place, where the Monastery is today. They realized that the will of the Virgin Mary was to build the monastery at that point, which she had chosen, and where the original core of the monastery was finally built.
The name Gerontissa was attributed to the picture much later, due to the following fact: The original position of the image was in the Holy Step, behind the Holy Trinity. At the time of the miracle, a very virtuous and old abbot counted in the last hours of his earthly life. By divine revelation, he experienced his end and wanted to communion at a particular day. For this reason he begged the holy monk priest on that particular day, to shorten the Divine Liturgy, to prevent communion. The monk, however, did not obey and continued to operate slowly.
Suddenly, the voice of the Virgin Mary was heard by the icon, which prompted the monk to finish the Divine Liturgy quickly, so that the abbot could prevent it. 'So it happened. As soon as the Elder received the communion, he was asleep and because of this incident, the image acquired the name "Gerontissa", which means ‘elder woman’.
Then, the icon was moved out of the Sanctuary and was placed on the left pillar of the main church, where it is located until nowadays, so that visitors of the monastery may worship. The picture was refurbished and invested with a newer silver cover, of high art, because of the wish of the Virgin Mary, paid by a Constantinopolitan woman ruler.