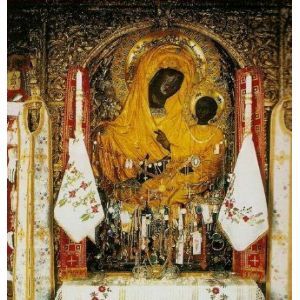 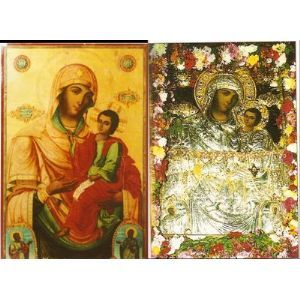 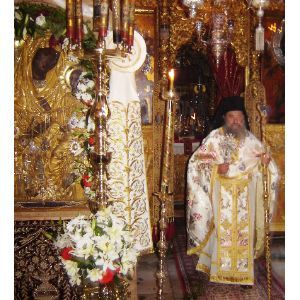 The best-known miraculus icon of the Holy Mountain after the Portaotissa is an ancient wall-painting of the Blessed Virgin on the outside of the eastern wall of the refectory, to the right of the entrance, in the Docheiariou Monastery. In 1664, the trapezares Neilos, who used to pass regularly in front of the icon holding in his hand a lighted torch which he needed for his duties in the refectory, heard a voice telling him: “Do not come pat here with a torch, leaving smoke on my icon”. Neilos did not pay much attention to the voice, but it was soon heard again, imposing a punishment on the monk and leaving him blind. The brothers began to show great reverence in passing before the icon and hung a perpetual lamp before it and ordered the new trapezares to burn incense before it every day.

The blind Neilos spent all his time in a stall in front of the icon, imploring the Theotokos to forgive him and heal him, and his prayer was granted when, for the thirs time, a voice was heard from the icon which told Neilos that his supplication had been heard, and that it was to her protection, after God, and her overshadowing guardianship that the monks should thereafter have recourse for all their needs. She would hear them speedily, for her name is “Gorgoepikoos” - she who hears speedily”. This miracle and the promise of the Theotokos became quickly know to the whole of Athos and her icon became an object of pilgrimage for all the Holly Mountain.

The corridor was closed up and the icon was housed in the chapel which was built to its right. Innumerable miracles have been perfomed by it, and a special priest-monk, the “prosmonarios” attends to the needs of pilgrims.

See here all the available icons of Theotokos Gorgoepikoos