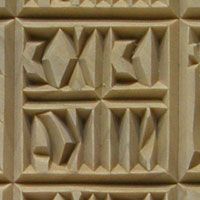 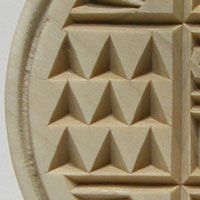 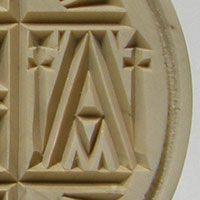 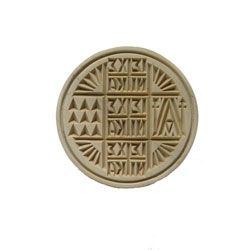 A religious holy bread seal (sfragida) stamps a special design on the prosforo before baking. During preparation of the Eucharist, the priest conducts the proskomithi in which he first cuts out the center of the stamped design that says "IC,XC, NIKA (Jesus Christ Conquers). It becomes the Body of Christ (the Lamb). Then the large triangle on the left is cut in honor of the Virgin Mary. The nine small triangles on the right are cut to commemorate the angels, prophets, apostles, holy fathers and prelates, martyrs, ascetics, holy unmercenaries, Joachim and Anna, and all saints, including the saint of the day's liturgy. The last cuts are tiny squares to remember specific names of the living and the dead.

In the ancient Tradition of the Orthodox Church, Holy Mystery of Communion is carried out through the mediums of wine and leavened bread. The bread is specially baked for the purpose of communion, and it is called "Prosphora" (meaning "that which is offered" in Greek.)

Prosphora is made from only four ingredients, wheat flour (white), yeast, salt, and water. Salt was not used in early times,[when?] and not now in the Jerusalem Patriarchate Church.

Any member of the church who is in good standing and whose conscience is clean may bake prosphora. Often in a parish church the women will take turns baking the prosphora; in monasteries, the task is often assigned by the Hegumen (abbot or abbess) to one or several monastics of virtuous life.

It is common but not necessary to go to confession before baking prosphora, and it is often done in the morning while fasting. Sometimes, special kitchen implements are used for making the prosphora which are used for no other purpose. There may be special prayers said before commencing, and baker tries to maintain a religious state of mind throughout, often saying the Jesus Prayer. Usually enough prosphora for a number of services are baked at the same time.

A prosphoron is made up of two separate round pieces of leavened dough which are placed one on top of another and baked together to form a single loaf. This double-loaf represents the two natures of Christ: human and divine. Before baking, each prosphoron is stamped with a seal usually bearing the image of a cross with the Greek letters IC XC NIKA ("Jesus Christ conquers") around the arms of the cross. This impression is baked into the bread and serves as a guide for the priest who will be cutting it.

Previous Next
The product has been successfully added to your cart.
...
Results  Filters
X
...